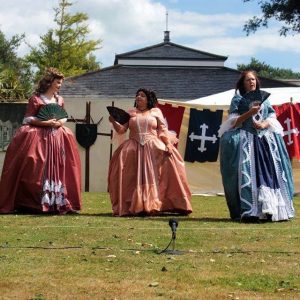 Like most of us, one of my earliest memories was the primary school Nativity Play. I of course wanted to be Mary. The role was given to my friend (nothing to do with my Erb’s – she had beautiful blonde hair ). 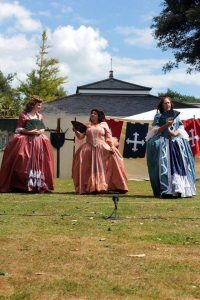 I got to be the Angel of the Lord, and afterwards everyone complimented me on having the biggest voice in the play. I was then asked to do readings in carol services and so on: when I told mum I wanted to be a teacher, she told me I was ideally suited as ‘You’re bossy and have a loud voice’.

But these early experiences gave me the confidence to enjoy being on stage, and in secondary school I took part in school plays whenever possible.

Once I had embarked on a career as an English teacher I immediately got involved in school drama again, this time from a different standpoint. I enjoyed seeing youngsters gain confidence as I had, and I helped start a Youth Theatre with other like-minded friends.

One of my proudest moments was stage managing the Amateur Premiere performance of Godspell. We did a midnight performance on the day the script became available for amateur groups – it was magic!

After marrying and having three children, my theatrical interests took a back seat – it wasn’t fair on husband or children to go out up to five nights a week rehearsing and performing.

Now that the children have grown up, I have gone back to my drama – I auditioned for a newly-written musical called ‘Rumpy Pumpy’ last year, saying I couldn’t sing or do accents: I ended up not only singing but playing three minor roles – as an Italian mother, a Texan PA and a New Zealand prostitute!!

During this show in March I happened to say to a couple of fellow cast members that I’d forgotten how much I enjoy the theatre – as a result I was asked to help with props for one play and ended up acting in two more recently: ‘The Return of the Musketeers’ for which I got to wear a gorgeous 17th Century gown, and ‘Midsummer Night’s Dream’, in which I played Hermia’s mother, rather than her father as Shakespeare originally wrote it!

I’m now rehearsing for Dracula in October and a panto (in which I am again singing!!) in December. I’ve made lots of new friends and am having a ball!

As for my Erb’s (I’m a left Erbling), it has never been a problem: I’m not a great dancer so I tend not to go for dancing roles; I have explained to the director that for the panto, in which I play a comedy police sergeant, I cannot hook my thumbs into the top of my braces for the traditional ‘Evening all’ so I will hook them into my waistband instead, as I can reach that with my Erb’s arm.

Maureen is in the Blue dress